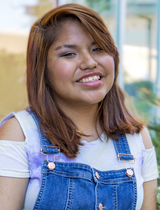 Just as the sky above seems to know no limits, neither does Sky, a bright high school sophomore. “I really like to tell people that I want to be president,” she says, “but I know I have to be mayor or senator first. “I just want to make a change in the world,” she says, adding that change includes making things better for children in foster care. “I want to know that kids out there are going to have homes out there to sleep in, that they have families who are there for them,” Sky says. Meanwhile, until that first campaign, Sky stays busy with sports and school.

Sky has played soccer since age 8, but took a crack at playing flag football in middle school. “I ended up making the team, but it was hard being a girl,” she says. Nowadays, the soccer goalie is teaching herself to kick field goals with an eye to trying out for a high school football team. Sky’s favorite foods include pizza, Mexican food, Dutch Brothers coffee, and macaroni and cheese. “Sky has a desire to learn more about her Navajo culture,” says John Hicks, a child specific adoption recruiter with Aid to Adoption of Special Kids (AASK). Because of her drive to reconnect to her cultural roots, Sky would prefer to be part of a Native American forever family. Hicks says Sky needs to be part of a two-parent family with, or without, other children in the home. “Sky will succeed when given the one-on-one attention that she needs,” Hicks says. Sky’s forever family should be active in the community, Hicks says, “because it’s important for Sky to find an outlet to serve others.”